Reg Barclay: Money in the Bank -by Rick Austin

Anybody who knows me knows that I root for the underdog. I like the dark horse in the running. I cheer for the little guy. Give me a lost cause and I’ll back it completely. It could be because I’m English by birth, and I was always told that the reason why the English support the losing side is because it’s usually them. That may be true, especially in football, but it’s also one of the reasons why I always got behind the character of Reginald Barclay. 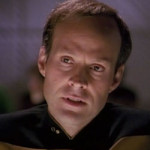 Played to perfection by Dwight Schultz, Reg became a fabulous recurring character in The Next Generation and Voyager. He wasn’t like the others around him. While everyone on board the Enterprise always seemed so perfect, he was anything but. He wasn’t good-looking, cool under pressure or always ready to face any challenge; instead, he was average, nervous at the best of times, and would back down from most confrontations. He stood out because he was normal.
Okay, so maybe normal is a bit of a stretch. He was smarter than the average Starfleet officer, and as I’ve said before Starfleet seems to be populated with nerds (albeit cool nerds). He could think his way around corners in ways that made Geordi look almost clueless, and could have probably given Wesley Crusher a run in terms of putting his high IQ to practical use. The problem though was that he lacked confidence in himself. He was afraid to speak out at staff meetings, stammered when giving presentations to the Starfleet top brass, and failed in most social situations.
He was us, or at least a majority of us.
Sarah Higley, an English Professor, created Reg Barclay in the episode Hollow Pursuits. He was a satire of Trekkies, playing up the public perception of them being intelligent and good-natured, but sometimes suffering from being socially awkward and obsessed with fictional characters. The episode focused on Reg, a normal crewmember who struggled to fit in with the rest of the crew. Because of this, he created versions of them on the holodeck who were less-than-perfect in order to bolster his self-esteem. He escaped from reality and retreated into a fantasy world that was easier for him.
I don’t know about whoever’s out there reading this, but I can relate to that. Life can be difficult at times, and sometimes having to interact with certain people can tie us up in knots. There are people I don’t get on with, and because of that I’ve found a variety of places to escape to over the years. Star Trek is one of them, so Sarah Higley wasn’t far from the mark on that one. Maybe that’s another reason why I like Reg.
Reg was an officer who mostly stayed in the shadows of others until he was needed. At times Commander Riker questioned if Reg belonged on the Enterprise, or even in Starfleet at all. It’s the same reason why a less adventurous Picard failed to advance through the ranks in the episode Tapestry. It was symptomatic of what happens in society to those of us who don’t stand out immediately, even if our contribution can be huge. People tend to ignore or underestimate those who fail to make a mark… and do so to their own detriment. Everyone has a contribution to make, even if they aren’t the ones who get the obvious attention.
Reg actually made some huge contributions. Despite his apparent failings he managed to save the Enterprise a few times and proved himself to be a valuable, if sometimes undervalued, member of the crew. Years later, he was instrumental in helping Voyager return home. His plan to contact Voyager was so ambitious that it got shot down by his direct superior, who chose to play it safe, but Reg had so much faith in his own abilities that he bucked authority and risked everything to see it work. There’s a good lesson there: even if those around you don’t always believe in you like they should, don’t ever lose faith in yourself. If you know something is right, stick to your convictions. 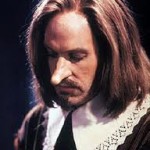 For me, one of Reg’s greatest moments had nothing to do with saving the Enterprise or Voyager; if anything, it was Reg at his most nervous. In the episode The Nth Degree we saw him acting in the title role of Dr. Crusher’s stage production of Cyrano de Bergerac. I’m a fan of that old story, and the 1950 film with Jose Ferrer is a personal favourite. For those who don’t know it, it’s about someone who’s ridiculed because of his large nose, yet has a good heart, a way with words and is the most capable swordfighter in the land. It’s a role that Reg could relate to in some ways.
Sadly, Reg stumbled over the words of the play and forgot some of them. The crowd applauded more out of politeness than anything, his performance being less than stellar. But what many didn’t understand was the courage that it took for him just to be up on stage in the first place, presenting himself to a crowd who could have easily ignored or ridiculed him. For me, that qualified his performance as a success. It showed the real heart of his character. He had his social problem to put up with, his weakness being a lack of confidence. But in the same way as Cyrano, Reg was a good-hearted and capable man.
I like underdogs, and I like Reg Barclay. But maybe I was wrong… maybe it’s got nothing to do with being English but rather about just being someone who can relate to them. Underdogs teach us a lot about never giving up, and that’s why we admire them. On the surface, Reg may not have seemed all that special… and that’s what made him most special of all.