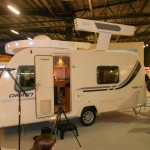 Through my life I have probably only ever stayed in a caravan no more than 5 times, yet I find myself surrounded by hundreds of them as well as thousands of caravan enthusiasts. I have to say that after walking through the halls of the 2013 Caravan and motor home show being held in Manchester, I find myself impressed with the vast improvements that have been made since I last stepped inside a Pontins caravan. But none impress me more than the one in front of me kitted out with warp nacelles and a saucer section this is no ordinary caravan. 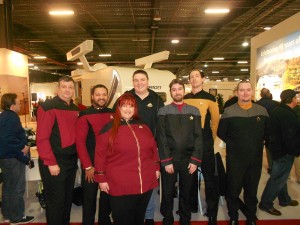 Surrounded by Trekkies in uniform I am happy to be reunited with the man that I spent many hours debating with at Destination Star Trek London, none other than Raul Davies. Standing out like a pig in a synagogue, my fellow Trekkies are all in high spirits and why would we be excited at an event like this? Their guest of honour is none other than the lovely Marina Sirtis. Whilst the away team are eager to get a picture and autograph, I am honoured to have the opportunity to interview the lady that I have known since I was a child as Counsellor Deanna Troi.

I eventually get called into the USS Caravan where I am greeted by a welcoming smile and a southern English accent that makes me feel at home despite being 250 miles away from London.

Considering the circumstances there is only one question I could possibly open with “why caravans?” I’m met with laughter and a refreshingly honest answer

“If you ask me to go somewhere I will show up, especially if it means a free flight home. This was ideal as I didn’t have plans to come to England this year. When I was asked it really was a treat. Any excuse to come home”

“So do you have much history with caravans?”

“No, except our lovely trailers on the set. My caravan at work was probably bigger and more luxurious than my New York apartment.”

“Are you still doing much voice over work?”

“Not as much as I was but to be honest it is probably my least favourite form of acting. It’s actually a real art and I’m lucky to have done the work that I have but I don’t do voices, I can do accents but not so much voices. When we was shooting Gargoyles which was basically a Star Trek reunion every week they had dedicated voice actors and the director would make an outlandish request and they would put their hand up and do this amazing thing. I would just think how the heck they do that, so it is a real art form.”

“Now Counsellor Troi, she was never really given any real opportunities to be taken seriously until after Jellico turned up. Do you wish that she had been forced to put on the Starfleet uniform earlier on in the series?”

“Well actually, yes I do. The reason I wasn’t wearing one from the beginning was because I was a few pounds overweight. That’s by Hollywood terms surely, your one of the most skinny in this building. I know, it makes no sense at all. I didn’t look good in the space suit it didn’t suit me, so they was on at me every five minutes to lose weight”

“I know it’s weird, it’s as if once they couldn’t see her cleavage anymore they realised that she was part of the crew with a proper job and can now write for her more. I was very happy to get into the uniform.”

“What were your feelings on the whole Worf relationship as for me it felt very forced?”

“I never liked the Worf and Troi relationship, my opinion was that the producers had seen beauty and the beast one too many times and I didn’t think it was very original. Also Michael Dorn is my best friend stateside, it was naff kissing your best friend as he’s like a brother to me. Though Michael Dorn loved it.”

“One of the constant jibes that you must get is that you crashed the ship twice, even though the second time you were under orders”

“Yes I do say that old baldy told me to crash the ship. Although my fan Megan did explain to me in technical terms that I didn’t actually crash the ship. But I do have to say just like an old lady driving a car down the road, that planet came out of nowhere!”

“Before the last season of Dancing with the stars, there was quite a push by your fans to get you on the show. Are they going to try again for next season?”

“I heard a rumour that the show’s producers don’t like you promoting yourself to get on it. So my feeling is now that they know I want to do it, but I don’t think I want a campaign this time as it may be working against me rather than for me. The problem is that the show is choccablock with reality stars as they are so current, though to be honest I think I would rather do Strictly Come Dancing. I think it’s more fun as we don’t take ourselves as seriously as what the Americans do.”

“Can you tell us about any of your upcoming projects?”

“I’m very superstitious, so I can’t say anything until the contract has been signed. But I have a few things in the pipeline.”

“Are you going to be appearing at any upcoming UK conventions?”

“Well there may be one in July back here in Manchester. But none of the UK organisers have invited me to any for two or three years now. I would have loved to have come to Destination Star Trek London; you have to get onto the promoters in England as they have to invite me.” 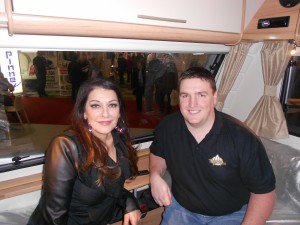 So as our chat came to a close Marina bid me an honest and heartfelt “God Bless” and I left feeling exhilarated and fulfilled as she was everything that I had expected her to be and more. I for one will be letting the UK convention organisers know that I want her at upcoming UK events and I hope that other fans do too.