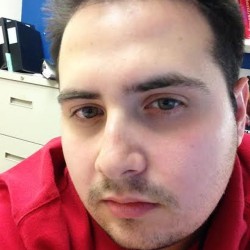 Favourite Trek Series: There can’t be any answer other than Deep Space Nine. Even though I host a Voyager podcast, DS9 by FAR was the best that Star Trek ever got on television for me.

Favorite Captain: I love DS9 to death, and I love me some Janeway, but at the end of the day, Picard was my first captain, and isn’t your first always the most special?
In all seriousness however, he always felt like a second father figure growing up. As I watched TNG as a kid, I always wished for Picard’s confidence and calmness under fire. To this day I am sad that I won’t see any more adventures with him.

Favourite Ship: The U.S.S. Enterprise-E, followed closely by the JJ U.S.S. Enterprise NCC-1701. I remember as I saw both ships come on screen for the very first time, cold shivers ran up and down my spine. Isn’t that just the best nerd feeling?

Favourite episode: Damn, do I have to pick just one??? I guess I’ll go with “Call To Arms,” the fifth season finale of DS9. It has a little bit of everything: character development, a little bit of romance, and some epic space battles.

Favourite non-regular character: The entire secondary cast of DS9. I’m not kidding, I can’t narrow this down to one. I think if someone held a gun to my head, I might go with Garak, but when I think about others like Dukat, Weyoun, Winn, and Martok, it’s nearly impossible!

Trekker or Trekkie: Does it matter? We all ain’t gettin any at the end of the day.

JK, but seriously, we’re all nerds at heart.

About me: I got bit by the Trekkie bug really early in life at the tender age of 5 when my dad took me with him to see Star Trek Generations in the theater in 1994. I’ve always considered this movie near and dear to my heart, in spite of all the crap it gets from fans. The crash of the Enterprise-D in particular REALLY stuck with me at that young age, I had never seen anything like that before. After that, I started watching the TNG re-runs, and now 18 years later, I have turned myself into a walking, talking Star Trek encyclopedia.

Find me: Battling Ben McCulloch every Thursday on The Delta Quadrant