Zoe Saldana Wants A Role In The New Star Wars 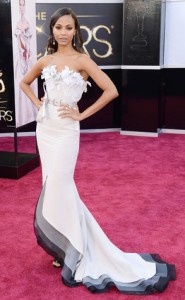 Zoe Saldana told E Online when appearing at the Oscars that she was really happy for her Star Trek director J.J. Abrams for landing the same role for the seventh Star Wars movie.

“I’m totally ecstatic,” However, she added, “We are going to give him s–t because we don’t want him to ever think about leaving just in case we go into a third installment of Star Trek.”

Saldana did admit that she wouldn’t mind a part in Star Wars.

“I’m getting ready to call them, I tell you that,” she said. “I want to be a sexy something, like a princess from another planet.”