YOUNG church-goers have boldy gone where no man from their congregation has gone before – into the world of Star Trek.

The youngsters have all starred in a film production of The Beginning – a spoof version of the science fiction TV favourite.

The premiere of the 15-minute long film was shown at St Paul’s Church, in Longton, last night during its annual alternative Christmas service.

The 15-strong cast appeared on the big screen as characters from Star Trek and Star Wars on a quest to learn the meaning of life. Their travels bring them to Longton where they discover a Bible and learn the true meaning of Christmas – the story of Jesus Christ. 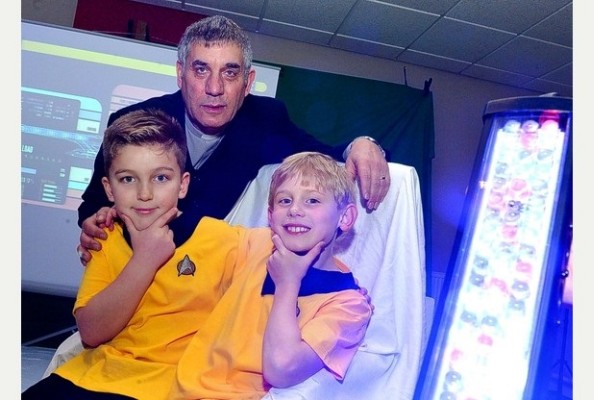 Vicar John Alessi said: “We are always looking to do something a bit different to make the faith relate to today. Normally we have a traditional carol service but we thought we would do something completely off the radar.

“We do have a normal Christmas programme around Advent but this is about trying to get the children involved, and give them an opportunity to do something they’ve never done before.”

Filming started in July and saw the stars act out their scenes in front of a green screen. This was then replaced with a futuristic backdrop and special effects using the latest computer programs.

Film director Steve Kenyon said a lot of hard work has gone into the project since the idea was first mooted more than seven months ago.

The 43-year-old, of Lundy Road, in Longton, said: “It has taken a lot of man hours in editing and production.

“At times we definitely thought we had bitten off more than we can chew because it was so challenging.”

Mr Kenyon and the film’s producer, Roy Clarke, both have a background in radio, working for Stoke-on-Trent based Christian station United Christian Broadcasters.

Mr Clarke, of Ferndown Drive South, in Clayton, said the idea came from a church in New Zealand which had done something similar.

The 64-year-old said: “It wasn’t the same genre. It was funny and I thought it would be better to do this instead of the traditional nativity. We found a script for a play and asked permission to adapt it for the screen. It still has a Christian message in it.”

Rev Alessi added: “There’s a lot of mileage in it for us from the faith point of view to try and explore that and bring people around to thinking about the meaning of life. It’s a perfect vehicle.

“We have been going to where no church has gone before for the past six years since I have been vicar.”

For more information go to www.stpaulsonline.co.uk