The man behind the transporter effect

Home » News & Features » The man behind the transporter effect

It was a former North Dakotan, not Scotty, who “beamed” Capt. James T. Kirk aboard the Starship Enterprise during almost every episode of “Star Trek” in the 1960s – or at least, it was Bowman’s Jim Rugg who created the illusion that Kirk’s body was being reconstituted inside the transformer of the Enterprise. 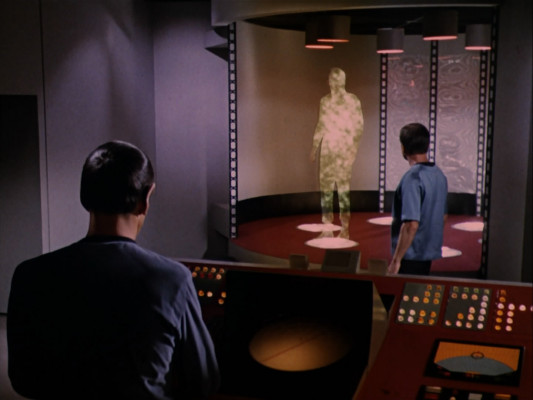 He did this by filming a transparent container filled with water, into which he sprinkled and stirred glitter.

During the time Rugg served as special effects director, computer-generated visual effects had not yet been invented, and he often had to rely on illusions to create the desired results. Possessing a creative mind, he loved these challenges.

The Ruggs’ home was southeast of Bowman, where Earl had a homestead. He also taught at Bowman High School and worked in the coal mines. Madge was the school superintendent for Bowman County.

In 1924, the Ruggs moved to Los Angeles, and Earl found employment as a “maintenance man” at motion picture studios. When the 20th Century Fox studio was established in 1935, Earl was hired as a prop maker, and he eventually worked his way up to manager of the studio’s property department.

Jimmy Rugg attended Redondo Union High School and spent much of his time operating a ham radio. To earn money for college, he went to work for a rival studio, MGM, and “polished the floors of the Emerald City on the set of “The Wizard of Oz.”

After his high school graduation in 1939, Rugg attended Pepperdine University and UCLA.

With war clouds looming, he enlisted in the Army on Oct. 15, 1941, and 50 days later, Japan bombed Pearl Harbor. Rugg was commissioned as a second lieutenant and sent to Europe to operate a mobile radio truck because of his experience with ham radios.

Rugg took part in Operation Overlord, the D-Day invasion of Normandy, on June 6, 1944, and relayed live broadcasts by war correspondents to London for transmission to the U.S. He went south with the Army into France, and when Paris was liberated on Aug. 24, “he attached his antenna to the roof of the Louvre,” transmitting the first broadcasts about the city’s liberation.

After his discharge Dec. 4, 1945, Rugg went to work with his father making props and performing other carpentry jobs at 20th Century Fox. Wanting to put his creative talents to use, he began working as an assistant for special effects directors.

One of Rugg’s first movies in that capacity was the science-fiction film “The Day the Earth Stood Still,” released in 1951. He received his certification in special effects in 1953 and was given a number of opportunities to travel to various locations to work on movies. However, he wanted to remain in Los Angeles to be with his wife and children and turned his attention to television.

During the 1950s and early 1960s, Rugg was in charge of special effects for many episodes of “Perry Mason,” “Wanted Dead or Alive,” “Broken Arrow,” “Zane Grey Theater,” “Johnny Ringo,” “The Rifleman,” “Four Star Playhouse” and “Burke’s Law.”

Rugg received national news exposure for developing a special kind of body paint, which could safely be applied to people, for an episode of “Burke’s Law.”

One person who was appreciative of Rugg’s work was Gene Roddenberry. He was preparing a science-fiction television series called “Star Trek” and asked Rugg to be the show’s special effects director.

Before any filming could take place, the Enterprise needed to be built, and Rugg “supervised its construction.” The interior of the spaceship involved the most work and, in particular, the “bridge” – the operations/command center of the Enterprise, where most of the filming would take place. It was made up of eight individual sections that were combined to form a circle, and it contained hundreds of electrically automated instruments, switches and lights.

Rugg estimated that miles of electrical wiring went into building the bridge. The construction was completed in late August 1966, and the first episode of “Star Trek” aired Sept. 8.

For his work, he was nominated for an Emmy in 1967. The show had a faithful following but because the Nielsen ratings were low, the show was canceled in 1969.

Real appreciation of the series did not occur until years later, and the ardent fans became known as “Trekkies.” Every year since 1972, thousands of fans have attended annual “Star Trek” conventions.

After 1969, all of Rugg’s children had grown up, and he now felt free to travel to locations where movies were being filmed. The two motion pictures that he worked on that involved considerable special effects work were “Silent Running” in 1971 and “The Poseidon Adventure” in 1972.

Rugg was especially intrigued with “Silent Running,” telling a reporter that he “felt he was doing something unusual.”

Rugg retired in 1981 and died Feb. 13, 2004. However, he is remembered by rerun episodes of “Star Trek,” and his gadgets on exhibit at the Smithsonian.

On Sept. 13, the “PBS News Hour” reported that his most enthusiastic fans were perhaps the executives of the National Security Agency. They modeled their war room in Fort Meade, Md., after the bridge of the Enterprise. Important guests are invited to sit in the “captain’s chair in the center of the room.”

To my knowledge, the former disgruntled employee, Edward Snowden, was never invited to sit in that chair.