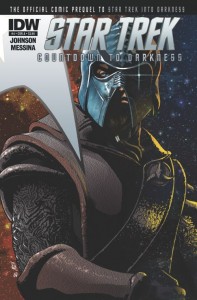 During post production the prison escape scene near the beginning of 2009’s Star Trek film didn’t need to be in the final cut and JJ Abrams’ redesigned Klingons were not seen, until now. The race plays a role in the new comics series that serves as a narrative bridge between the first film and the new one, Star Trek Into Darkness.