From today (19th December) Kuala Lumpur has become the first Asian city to display items from the Star Trek: The Exhibition after a successful run in Vancouver, Canada.

Star Trek the Exhibition is the worlds largest Star Trek info and artifact exhibit ever. You’ll be able to view authentic costumes, props, set pieces and other things from all Star Trek releases, from the TV show to the current movies. You will get to see just how detailed and precise these items are. You’ll get a glimpse into what it would be like to really live in the Star Trek World.

The exhibition will be held until 31st March 2013, highlights for what visitors can inspect include a replica of the transporter, the legendary Captain’s chair and a 7m-long model of the USS Enterprise starship.

Visitors can also leaf through copies of the script used in the Star Trek: The Next Generation television series at the National Science Centre in Bukit Kiara. 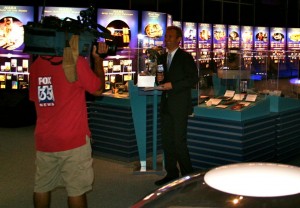 “I am confident it will be a success in view of the many Star Trek fans here,” she said.

EMS Holdings Pte Ltd chairman Datuk Jared Lim said “it was interesting to note that many inventions such as handphones were inspired by fictional gadgets on Star Trek.”

“The handphone is based on the communicator in the show whereas tablets were inspired by Star Trek’s personal access display device or PAD,” he said.

The exhibition is open from 9am to 5pm daily except Fridays. Tickets are priced at RM20 per adult and RM10 for children and students.

For more information about Star Trek the Exhibition visit the website