Star Trek Into Darkness – Inside Look 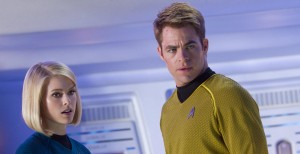 The Esurance Facebook Page has launched a new Star Trek Into Darkness widget that provides all kinds of goodies for fans looking forward to the sequel, including a new preview featuring the likes of Abrams and stars Chris Pine, Zachary Quinto and Zoe Saldana. Most of the footage shown in the clip is taken from the previously released trailer.

The Facebook page also gives you the chance to enter a sweepstakes to win tickets to the film’s U.S, premiere (including $2,500 in travel expenses); a “Vulcanizer” that allows you to upload photos and make yourself look like Spock; and walpaper, icon and poster downloads.