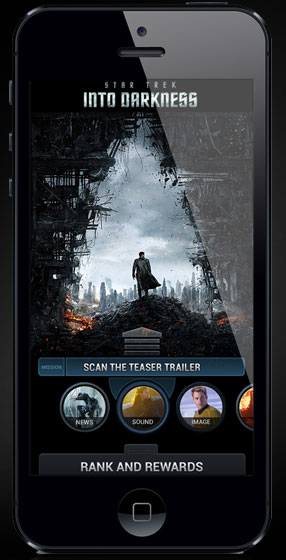 Recently Paramount and Qualcomm announced a Star Trek Into the Darkness app. Click here to read the press release.

Now available to download in the U.S. and Canada for iOS and Android at Apple’s App Store and Google’s Play Store.

Designed to appeal to hard-core Trek fans and more casual users, the Star Trek app comes with between 30-40 missions, with eight to 10 available at any given point and the option to skip missions that don’t seem especially interesting. New missions will become available every week.

Some missions will involve scavenger hunts, such as finding and scanning the latest “Star Trek Into Darkness” poster or visiting an AMC theater; some tasks will use an audio scan function to recognize when users are watching Star Trek content on TV or elsewhere and reward them with points. Some tasks will only be able to be completed inside certain areas.

Hero Complex got an early look at the app, sitting down at Paramount with director of product development Mitch Lusas, for a guided tour of what looks to be a fun foray into Abrams’ universe.

“This app is like the Star Fleet Academy,” Lusas said. “You start off as a cadet, and you complete these missions. As you complete each mission, it will disappear and a new mission will come up. You’ll advance in your rank, you’ll unlock content and there will be some other exclusive things that will come up as well.”

“The higher you get in your rank, the more content you will actually unlock,” Lusas continued, “things like potentially extended versions of some videos we might be releasing. We’ll also have some information that’s exclusive coming to this app.”

Like, say, details about the top-secret villain Benedict Cumberbatch will play, the man now known as John Harrison?

“For people who are diehards, they’re going to find hints in here,” Lusas said. “There are going to be hints. His character is fun.”

The launch coincides with Sunday’s Super Bowl game; a new extended trailer is set to debut during the second quarter of the game.

Lusas is confident that Star Trek Into Darkness will live up to the hype.

“I can say this, JJ, he’s got a great story,” he said. “I think fans are going to love it. Being a Trekkie, I’m super stoked. He’s able to give attention to every one of the characters and then create some really great plots. This one, it’s going to be a really great film.”