Blood will flow when fans of “Star Wars” and “Star Trek” rally their supporters later this month.
At least that’s the hope for the upcoming American Red Cross blood drive that pits supporters of the two popular entertainment franchises against each other to see who can turn out the most donors. The Galaxy Blood Drive is from 9 a.m. to 2:30 p.m. on Saturday, Dec. 28, at the donor center at 3131 N. Vancouver Ave.

“This is a great event for us,” says Red Cross spokeswoman Daphne Mathew. “Donations normally drop between Thanksgiving and New Year’s because people are so busy. But ‘Star Wars’ and ‘Star Trek’ both have a lot of fans who turn out, and we always have a lot of fun.”

The competition, similar to the Oregon vs. Oregon State Civil War blood drive, has been held three times in the past. It has been won twice by “Star Wars” fans, which is not surprising, considering the popular franchise has two active fan clubs in the Portland area, both of which have a lot of practice supporting charitable events in authentic-looking, home-made costumes. 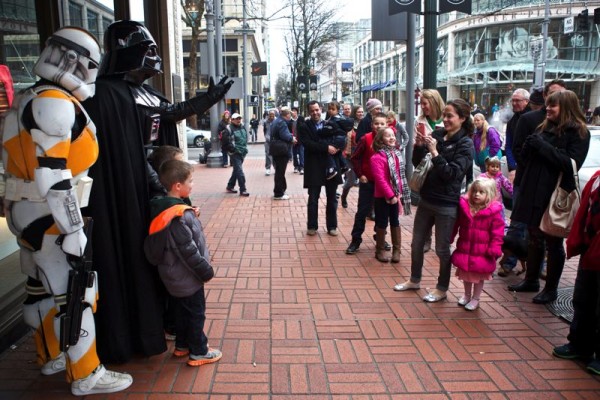 Most recently, more than a dozen of them showed up to support the Salvation Army bell ringers outside of the downtown Macy’s on Saturday, Dec. 14. Startled shoppers stared in awe as Princess Leia, Chewbacca, Darth Vader, a small army of Imperial Stormtroopers and other characters from “Star Wars” encouraged holiday donations.

Many children posed with them for pictures, including Finegen Kling, 8, and his brother Kaian, 6. Their mother, Shawn, described them as “huge ‘Star Wars’ fans.”

Gatherings of local “Star Trek” fans, commonly called Trekkies, are more informal, says Jim Colvill, who enjoys dressing up as a Klingon for informal viewing parties of the franchise’s TV series and movies.

“Our most important rule is, have fun,” says Colvill, a retired chef who once helped organize Klingon Karaoke nights at local bars. Dressed up in a long black wig and prosthetic forehead, he would belt out classic rock songs in Klingon, the language of the extraterrestrial warriors who have appeared in most of the “Star Trek” series and movies.

The more formal “Star Wars” appearances are mostly organized through their local fan clubs. One is the Cloud City Club Garrison 501st Legion, based on the dark side of the universe created by filmmaker George Lucas. Members dress like just about every bad guy in the series, including Sith Lords like Darth Vader and Darth Maul, bounty hunters like Boba Fett and Greedo, Tuscan Raiders and Gamorrean Guards, and, of course, Imperial Stormtroopers. The other is the Kashyyyk Base Rebel Legion, whose members dress like the good guys, including Luke Skywalker, Han Solo, Princess Leia and Chewbacca.

Both clubs belong to Star Wars Oregon, which has dozens of members throughout the state and Southwest Washington. They are affiliated with national organizations endorsed by Lucas. They started in 1997 and have more than 6,000 active members with 9,700 approved costumes among them in almost 50 countries around the world.

One local member is Steve Squire, a 44-year-old software engineer who belongs to the 501st Legion, nicknamed “Vader’s Fist.”

“I became a Stormtrooper because I like the way they look and don’t resemble Mark Hamill or Harrison Ford,” Squire says of the male leads of the original trilogy.

Squire says he first became fascinated with “Star Wars” when he saw the original 1977 movie as a child.

“I just thought, this is the greatest thing I’ve ever seen. I saw all the movies when they came out, but as I got older, I kind of thought I should outgrow them. But when I got old enough I said, I really like “Star Wars,” so why not get more involved.”

Squire started going to “Star Wars” conventions, where he met other fans and learned about the national clubs and local chapters. He even met his future wife, Michele, at an event in Indianapolis. She is a Biker Scout in the 501st Legion.

Squire says the members come from all backgrounds and walks of life. They share an enduring love for the “Star Wars” story, which has been popularized in movies, TV shows, video games, toys and collectibles.

“It’s a new context for mythology about good versus evil and a hero’s journey. And the costumes look really cool,” Squire says.

According to Squire, each member makes his or her own costume, a process that can take years. No off-the-shelf costumes meet the club’s standards. Some members in other states fabricate the plastic body armor for the Stormtrooper costumes, which members buy and customize to fit. Others sew their own creations or piece them together from clothes found at Goodwill and surplus stores. The amount of detailing can go beyond what the actors and actresses wore in the movies.

The organizations have raised millions for charitable causes. Local members participated in nearly 100 events in 2013 alone, raising more than $10,000 for charities including Make-A-Wish Oregon, The Doernbecher Foundation, and Randall Children’s Hospital. In addition to the Macy’s appearance, recent events include participating in toy drives at area Les Schwab and Walmart stores.

In 2010, leaders of the 501st Legion made blood drives a global charity challenge. The goal was for members to get as many “Star Wars” fans as possible around the world to participate in them. Local Cloud City Garrison and Kashyyyk Base members worked with the Portland chapter of the American Red Cross that year to set one up. Some of their employees were “Star Trek” fans who came up with the idea of doing a “Stormtroopers vs. Klingons” competition, with the winning team getting a trophy.

According to Squire, the first one was a lot of fun. There were about a dozen Klingons and a few Starfleet officers competing against Darth Vader, Chewbacca, a Stormtrooper and a Jedi. “Star Wars” won it. Only a single Klingon showed up against about 14 “Star Wars” characters in 2011, but that was enough for “Star Trek” to win the day. About five people from each side showed up again last year; “Star Wars” won again.

Squire hopes more members in costume will show up this year to generate even more interest in the blood drive.
Colvill also is looking forward to the drive, which he calls competition against “the other empire.”