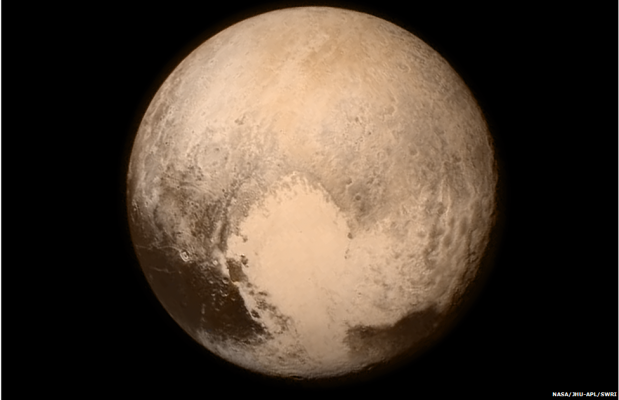 Nasa’s New Horizons spacecraft has made the first visit to Pluto, speeding past at 14km per second.

Earlier, the space agency released the most detailed picture yet as it hurtled towards the dwarf planet on Tuesday.

The spacecraft is currently out of contact with Earth as it continues its observations.

Talking about the latest image of Pluto that was returned just before the flyby, Nasa’s science chief, John Grunsfeld, said: “This is true exploration… that view is just the first of many rewards the team will get. Pluto is an extraordinarily complex and interesting world.”

“This is clearly a world where geology and atmosphere – climatology – play a role. Pluto has strong atmospheric cycles. It snows on the surface. These snows sublimate – (and) go back into the atmosphere – every 248-year orbit.”

The probe is investigating not only Pluto but also its five moons: Charon, Styx, Nix, Kerberos and Hydra.

To achieve that, it has had to perform a furious set of manoeuvres during the flyby, pointing every which way in the sky to lock on to the different targets.

Al Tombaugh (son of the man who first found Pluto) is obviously delighted that a sample of his father Clyde’s ashes is on board New Horizons, speeding past Pluto and now heading into the unexplored realm of the Kuiper Belt.