Chapter one: Susani Elizey and the Grand Piano

The soft sound of a piano filled the USS Denmark’s recreation deck. 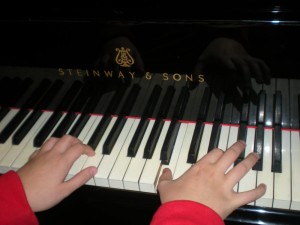 It was the music to one of Elizey’s favourite 20th century movies, and it was her playing. She didn’t have to look at the sheets or the keys, she simply let her fingers do the work as they gracefully flew over the keyboard. She closed her eyes and completely dived into the music, the rising and falling of the melody sweeping her away.

Elizey loved the grand piano, but she would have liked it even more if it were real, and not a holographic re-creation or a replicated reproduction. Many people she knew would argue that something replicated was just as real as if it were handmade, and therefore things on the holodeck were kind of real too. But in her mind, she knew that while the computer may have replicated them down to the finest available detail, it still wasn’t real to her.

It was the small things that made the difference, usually imperceptible to others, but noticeable to her.

The strings were tuned a little too exactly, the keys reacted a little too precisely, and all in all it was a little too flawless. If she wanted to have a perfect sound, she could just as well play a synthesizer. On a genuine piano, some keys were always a little bit looser than the others; some strings sounded very slightly off, but not enough to actually disturb. All of these little flaws that made every piano unique were sadly missing on a replicated instrument.

But at the moment she didn’t mind too much.

After all, a piano was a piano, replicated or not, and when she was playing all that mattered to her was the music… especially now that she was coming to her favourite part of the piece. She was near the end of the epic slow forte part, and was about to raise the tempo for the reprise of the main theme, when she was interrupted by the bleeping of her communicator.

Taking her foot from the pedal to silence the piano, but keeping her fingers still hovering over the keys for the next chord, she answered. “Commander Susani here.”

“This is Roan,” the much-too-familiar voice of her captain came back. “I’d like to see you in my ready room in five minutes.”

For a moment Elizey thought about objecting, but there was something in Roan’s tone that told her it was urgent.

“I’m on my way,” she replied with a sigh. She closed the lid of the piano and stepped down from the small stage. Before she was out of the door, the piano had dissolved and another group of musicians had taken her place, replicating their favourite instruments.

All the way up to the bridge, Elizey puzzled about why the captain wanted to see her.

It was the first time in what seemed like ages that his voice had revealed to her no clue about what was happening. The only thing she knew was that it had implied a certain urgency, but apart from that she could tell nothing from Roan’s tone of voice.

By the time she had reached the bridge she had managed to convince herself to calm down. Upsetting herself about the matter wouldn’t help now, and she’d know what all this was about soon enough anyway. When she entered the ready room she was back to her usual calm self.

Roan was sitting behind his desk and motioned for her to sit down.

After she had followed his invitation, they sat there in silence for a moment until he suddenly asked, “Why haven’t you told me?”

“Not told you what?” she asked back, a little confused.

“That you’re leaving,” he replied. “I mean, I know that this had to come at some point in time, but I thought you’d tell me in person, and not let me know it through the transfer orders.”

“I…. am….” she stammered, perplexed, and for the first time in her life she felt really speechless. Finally she asked, “Transfer orders?” 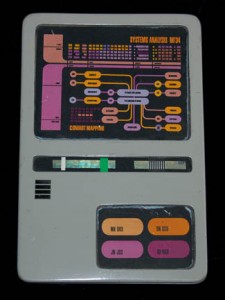 The Captain raised his eyebrows. He sighed, and without another word handed her a PADD.

Susani read through the text several times before she turned around to Roan, who was now standing at the window and looking outside. “That’s a joke,” she said, disbelieving.

“I doubt that,” he replied. Then he turned around and walked back to her. “All I can say is that I wish you well with your new assignment.”

Elizey’s thoughts were still turning in her head, trying to make sense of everything. “And what if I don’t want to..?”

Roan smiled mildly. “I don’t think that you have much of a choice here.”

After a while the commander finally nodded. “Alright,” she said. “Then I think I should go now, and pack my things.”

He nodded and she stood up to go. She was nearly out of the door when the captain called her back. “And Liz…”

“Yes?” she asked, turning around again.