Star Trek.com chatted with the artist. Here’s what he had to say:

“A Piece of the Action,” 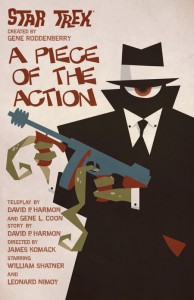 Let’s start with “A Piece of the Action.” It’s very stark. What were you aiming for here?

Ortiz: I don’t think you need much when you have an alien holding a Tommy-gun. This may not be what they looked like in the actual episode, but I can imagine this working in either the Gold Key Comics or The Animated Series. I consider the two mediums to be part of TOS world.

What went into your choices for the gun/phaser rifle, the eye/face and the tentacle/hands?

Ortiz: I re-imagined the Iotians as shape-shifters. My interpretation is what I imagine them to look like still dressed as 1920’s gangsters. Even if they don’t shape-shift, it’s nice to have that in the back of your mind while watching the episode. The phaser-Tommy gun melds the two eras together. 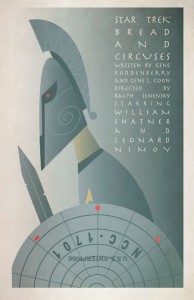 Great choices for “Bread and Circuses,” with the Enterprise hull as a shield, and the angular, Spock-like helmet. It’s like Trek meets Spartacus or 300. How quickly did the idea for the hull come to you?

Ortiz: Pretty quickly, actually. Once I started to add the shield, I knew it would be a good way to include an element of the Enterprise.

You have all the copy stacked and aligned. Take us through that choice.

Ortiz: The stacking was meant to evoke a roman column without actually illustrating one. 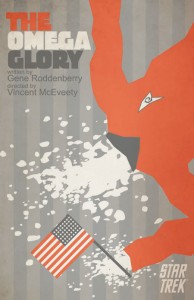 “The Omega Glory” is pretty graphic. What were your inspirations for it?

Ortiz: The opening teaser seemed interesting enough to include in a poster. The flag was added because of the episode’s story line. I think if you’re unfamiliar with the episode, this image should spark some interest in viewing it.

Had you been itching to depict the fate of a red shirt in one of your Art Prints?

Ortiz: I was. And I didn’t think that I would get the chance until I came to this episode. This is one of maybe two where I paid homage to the red-shirts. 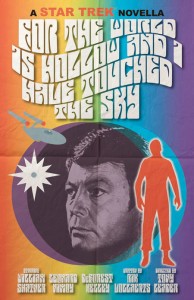 “For the World…” is super-groovy. What made this the one to go that route?

Ortiz: This one went through several rounds. I originally wanted to go with a romance novel type of illustration. I decided instead to focus on just McCoy, since Spock and Kirk had gotten their own posters already. Rather than focus on the negative aspect of McCoy’s illness, I chose instead to celebrate his marriage and cure with a colorful rainbow effect.

Why the black and white McCoy? Why the words A Star Trek Novella?

Ortiz: The black and white image avoids getting lost among all the color and fancy lettering going on around it. In keeping with some of the love theme, a novella is what the Latin soap operas are called.

If one of these were to end up on the wall in your own home, which one would it be and why that one?

Ortiz: I would pick “For the World Is Hollow and I Have Touched the Sky.” This is the type of poster that maybe would have been found in an issue of Dynamite Magazine back in the early 70s. It has a nostalgic warmth to me.

The StarTrek.com Shop is offering the four prints as a set of plated-printed lithographs on 100-pound, aqueous-coated, satin-finish paper. Each print measures 18×24 inches and the set of four is $34.95.  US and Canada fans can purchase the sets there