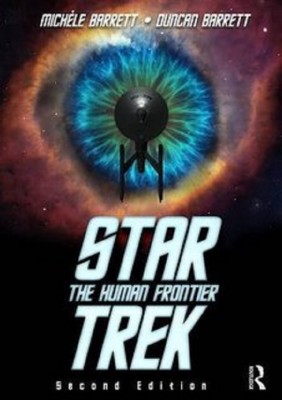 On 8th September 2016, Star Trek turns 50. Since the first episode, ‘The Man Trap’, was broadcast in 1966, this vast entertainment franchise has released over 700 installments, across five live-action TV series, a spin-off cartoon, and 13 cinema releases. To mark the golden anniversary this year, Routledge have commissioned a Second Edition of Michele and Duncan Barrett’s acclaimed 1999 book Star Trek: The Human Frontier. This new edition is extensively revised and expanded by over a third, now covering all 50 years of Star Trek’s output, including the most recent series Enterprise, and the trilogy of blockbuster movies released by J.J. Abrams since 2009.

The book is launched in London on 8th September 2016, exactly 50 years to the day since Star Trek was first broadcast.

‘Star Trek has been subject to a lot of scrutiny by literary and cultural critics … The bad conscience that many have about serious discussion of popular culture means that Star Trek can still be read simplistically, as a stalking-horse for denouncing the modernity of the American century. The Barretts are more subtle. A television series is a product of a variety of creators and so, inevitably, a rich complex of signs, hints and idealisms. There is no final reading of Star Trek, just an endless journey.’

‘The most interesting, and probably the best, study of the actual Star Trek programs and films that I have seen. It is scholarly and informative, and also very well written, quite accessible to the general reader.’

‘There are only a handful of book length surveys of Star Trek, and this mother-and-son collaboration is a welcome contribution to those. It provides a valuable overview of the programme from its original appearance 35 years ago, tracing the ways in which successive series have reproduced and challenged the original “liberal humanist” ethos of Star Trek.’

In a world shrunk by modern transport and communication, Star Trek has maintained the values of western maritime exploration through the discovery of ‘strange new worlds’ in space. Throughout its fifty-year history, the ‘starry sea’ has provided a familiar backdrop to an ongoing interrogation of what it means to be human.

This book charts the developing Star Trek story from the 1960s through to the present day. Although the core values and progressive politics of the series’ earliest episodes have remained at the heart of Star Trek throughout half a century, in other ways the story it tells has shifted with the times. While The Original Series and The Next Generation showed a faith in science and rationalism, and in a benign liberal leadership, with Deep Space Nine and Voyager that ‘modern’ order began to decline, as religion, mental illness and fragmented identities took hold.

Now fully revised and updated to include the prequel series Enterprise and the current reboot film series, this new second edition of Star Trek: The Human Frontier – published to coincide with Star Trek’s golden jubilee celebrations – addresses these issues in a range of cultural contexts, and draws together an unusual combination of expertise. Written to appeal to both the true Trekker and those who don’t know Star Trek from Star Wars, the book explores and explains the ideas and ideals behind a remarkable cultural phenomenon.

Michèle Barrett is Professor of Modern Literacy and Cultural Theory at Queen Mary University of London. Her books include Casualty Figures, The Politics of Truth, Imagination in Theory and the feminist classic Women’s Oppression Today.

Duncan Barrett is an internationally bestselling author of historical narrative nonfiction. His books include Men of Letters, The Sugar Girls, GI Brides and The Girls Who Went to War.