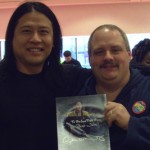 Favorite Trek Series:  Voyager.  I thought it was EXACTLY what Gene Roddenburry had in mind when creating Star Trek in the first place.  Exploring the unknown.  The original and TNG seemed to have forgotten that mission, but Voyager had no choice.  Getting home meant exploring the unknown.

Favorite Captain:  I would have to say Benjamin Sisko.  He kept the space station together through some pretty rough times.  He was the lead in fighting off the Dominion.  If I were ever to go into battle, Captain Sisko, more then any other captain in Star Fleet history, would be the one you want behind you if you want to survive.

Favorite Ship:  NCC-1701D.  It was a freakin’ luxury liner in space.  Everything you would want on a ship, is on that ship.  Holodecks, 10-Forward, gymnasiums, concert halls, you name it.  USS Voyager was a sleeker, updated version of the Enterprise D, but the ship could give itself a bloody infection.  The ship was sick more times then the crew.

Favorite Episode:  Yesterday’s Enterprise.  Time travel, back in war with the Klingons, dead Officers who are back.  While I generally hate alternate universe episodes, this was very well done.  It had drama, heart felt story lines and lots of war.  “Let’s make sure history never forgets…the name…Enterprise.”

Favorite Non-Regular Character:  Tuvix.  Tuvix was made out of a transporter accident.  No one knew how to approach him or what to make of him, but in the end, the whole crew grew to love him.  I also grew to love him.  I’ve always said that I wish in the Voyager episode “Deadlock” where the ship is split into two occupying the same space at the same time, Captain Janeway says that only five to ten people could cross the scission.  I believe when one of the Voyagers was boarded and was going to self destruct, Janeway should have sent as many people as she could.  Included in that should have been Neelex and Tuvok so they could reproduce the transporter accident and bring back Tuvix.  Only problem was, Tuvix came after Deadlock, so they would have never thought of it.

Trekker or Trekkie:  Trekkie.  It was trekkie in the beginning and it will be trekkie forever.

About Me:  I live in Omaha, Nebraska, USA.  I am a Slot Attendant for Horseshoe Casino, Council Bluffs, IA.  I am the guy who pays you when you hit a jackpot on a slot machine.  I was introduced to Star Trek: TOS in the middle 70’s when it was in syndication.  Star Trek ran on Sunday nights from 10:30 to 11:30.  I was allowed to stay up to watch it.  At that time you had to be a closet Trekkie, or people would tease you about it.  Today, its much hipper to be a Trekkie/Trekker.  As a Pizza Delivery man in the late 80’s, as TNG was broadcast, I recorded them on VHS as well as Cassette Tape.  I would play them in the car while on the pizza route.  When it comes to TNG, there is a very strong possibility that I can re-enact the script along with the actor, but sometimes I can’t remember what I had for dinner yesterday.