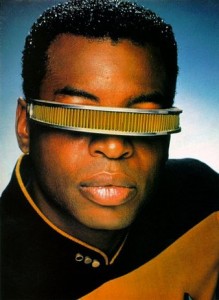 Playing Geordi La Forge on TV’s Star Trek: The Next Generation was more than just a job to actor LeVar Burton.

Gene Roddenberry’s Star Trek, which preceded The Next Generation, gave Burton a glimpse into a hopeful future as a child growing up during the civil rights movement in the United States. Burton started off as a fan of the venerable TV show, he said last week at the third annual 100 Year Starship symposium, a conference looking at ways to inspire people around the world to get involved in sending humanity to the stars.

“I was a young, black kid growing up in Sacramento, California, hooked on sci-fi,” Burton said. “Star Trek was one of the few representations of the future that included me. I was really attached to Gene’s vision. … Star Trek has always represented that hopeful aspect of this yearning that we have. When I was a kid, that was the present I wanted to live in.”

Burton also thinks that science fiction today has a lot to learn from Star Trek’s vision of the space-faring world of the future: “I wish there were more hope in the science fiction voice,” Burton said.

Instead of competing for resources, the residents of the Star Trek universe learn how to get along and cooperate, without letting issues of class, gender or economics get in the way for the most part, Burton said. 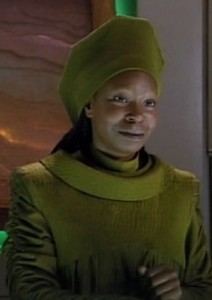 Burton isn’t the only Star Trek actor who started off as a fan inspired by the show. Whoopi Goldberg, who played bartender Guinan on Star Trek: The Next Generation, also remembers watching the original Star Trek series when she was growing up in the 1960s.

“Well, when I was 9 years old, Star Trek came on,” Goldberg has said, as quoted by startrek.com. “I looked at it, and I went screaming through the house, ‘Come here, Mum, everybody, come quick, come quick, there’s a black lady on television, and she ain’t no maid!’ I knew right then and there I could be anything I wanted to be.”

While ‘Star Trek’ influenced people around the world, the show’s unique brand of science fiction has also greatly influenced some real science being conducted today.

“I was at a conference earlier this year in San Francisco,” Burton said. “We are working on geosynchronous architecture in computers that will enable us to maximize the computing power and give us the opportunity to, in real time, do more and complicated computations that would be required for something like a holodeck.” On Star Trek: The Next Generation, the holodeck was a reality simulator that could replicate various environments.

Scientists working with NASA are also looking into warp drive technology, and recently a crowdfunding campaign to create the Scanadu Scout — a medical device like the tricorders used on the show — raised more than $1.5 million on Indiegogo.com.

The TV show is even beloved by scientists working for real-life space agencies. Earlier in September, NASA used a quote and theme music from Star Trek to add a little dramatic flare when officials from the agency announced that Voyager 1 became the first object built by humans to reach interstellar space.