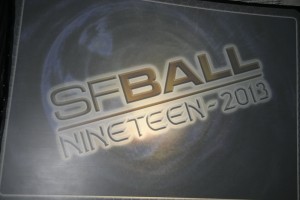 I was the lucky winner of a Saturday day ticket to attend the Si Fi Ball event in Bournemouth on 9th February 2013 with the Trek Mate team. I did not attend the parties or the whole of the weekend but my day experience was certainly worth the three hour train mission.

I have vivid memories and mixed feelings from attending Star Trek London in October 2012. This event was huge. The anticipation from the build up, the immense guest list, the museum and bridge, the Klingon and federation zones, the stunt show and free talks, the guest talks and the parties. What did I get out of it? Well I met all of the actors from the shows I grew up with who were all fantastic. The fluffing up events around the actors hardly seemed worth the effort or there appeared to be a lack of effort. However, I would do it all again just to meet the stars of the show that put every effort in for the fans at the event.

So with the guest list for the Si Fi ball not as close, what was I expecting from this event? The truth is not much.

After meeting up with the Trek Mate team on Saturday morning, I took a wonder round to find photo sessions with the guests with a reasonable queue. There was a large room with a few dealer stalls selling Star Trek merchandise, with writers and other stuff that I did not really understand. Steam Punk?

The Trek Mate team was then called in for the interview with Armin Shimerman and Max Grodenchik for which I graciously tagged along. The team had thoughtfully prepared the questions to ask the stars which proved to be a thoroughly engaging and in depth interview for which Armin Shimerman especially appreciated the discussion. Even to the point that when the actors were being called out to prepare for the guest talks, Max opted to continue the interview with the team. The interview was then rapped up when Chase Masterson entered the room. She said hello to the team and at my request of a hug, gave everyone one. What a truly lovely moment.

We then went on to the guest talks, which was also engaging. Armin Shimerman had some interesting points about the changing of Shakespeare’ Richard III since he was recently discovered hiding under a car park in Leicester. How can he pay for his parking ticket? He’s already Skint! What did surprise me was that the actors referred to ‘the interview they had just conducted’ at least three times during the questions that made it all the more real.

I then queued for what seemed like too long and paid for an autograph of Armin Sherman who said to me that he enjoyed the earlier interview.

I remember watching QVC’s Star Trek hour many years ago and seeing a Kirk and Picard on horseback statue from the film generations. For some reason this item is something that stuck in my mind and I have always wanted, so just imagine my surprise when I saw one at one of the dealers stalls at the Si Fi Ball. I only paid £13 for it but I would have paid double along with a special edition First contact Soundtrack for £2.

Feeling quite satisfied with my purchases and experiences from the day I took the time to have a drink in the bar before my train. I was soon deep in conversation with a Trill, a Klingon and a comic book artist who were all very friendly.

I then headed to the station for my three hour return journey. So was it worth it? Without a doubt it was. Although the scale was a lot smaller than Star Trek London and nothing like the guest list. There seemed to be a lot more that was done right. I was told that the Parties were especially entertaining. The dealer stalls, the general atmosphere and the overall experience was done just that little bit more personal and better.