Countdown To Darkness takes a step Into Darkness (Contains Spoilers) 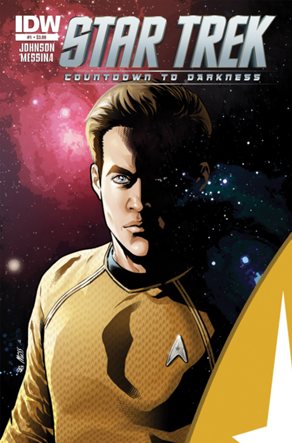 The following paragraph is taken from Cinema Blend.com about the 1st issue of Countdown Into Darkness:

John Gholson of Movies.com has a great breakdown of the first issue of Star Trek Countdown to Darkness, a prologue comic series that will be co-written by Into Darkness screenwriter Roberto Orci and allegedly bridge the two movies in Abrams’ universe. Avoiding as many spoilers as possible, it’s revealed that Spock (Zachary Quinto) is still grieving the loss of his planet, while Kirk (Chris Pine) is looking for a companion as he settles into his captain’s chair. The Enterprise crew, in the story, is ordered to scan the rings of Phaedus, an M-Class planet, from a safe distance … but the presence of a mysterious electronic pulse suggests that the crew’s Prime Directive might be faulty. There are a lot more details in Gholson’s analysis of the first book, so you might want to steer clear if you don’t want to be tipped about where Into Darkness is heading (or coming from). And while Benedict Cumberbatch’s character hasn’t shown up in the comic series yet, there is a reveal to a familiar Trek character that could get pulses racing.

Click on the the image below, which contains a spoiler of which some won’t want to know about