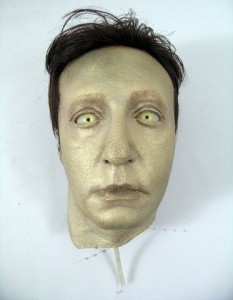 Premiere Props is auctioning off some Hollywood memorabilia Sept. 28, including some props found in the Star Trek movies and television series. One, Data’s head, was made in the likeness of Brent Spiner for the “Star Trek: The Next Generation” episode “Phantasms.” The starting price is $500, but it’s estimated to pull in at least $4,000.

The head, according to the website, is made with “Data-colored” foam latex, faux hair and plastic eyes. If you turn around and look at where the neck is severed, you can even find the prop circuity that makes up Data’s positronic matrix.

If you’re a Data fan, then you can also vie for a chance to get the jumpsuit uniform Spiner wore in 1996’s “Star Trek: First Contact.” This is expected to go for at least $2,000, with the starting bid at $200. It is possible that Spiner wore it for later Star Trek movies as well, including 1998’s “Star Trek: Insurrection.”

Other pieces in the auction include the proton collector from “Star Trek IV: The Voyage Home,” the plaque from the Son’a ship from “Insurrection,” a backlit control panel from the Enterprise bridge, a tricorder holster from TNG, phasers and tricorders from different series and films, and even a “signed” letter from “Star Trek” creator Gene Roddenberry.

or the full catalog, click here. The auction itself wraps up Sept. 28.