Trek Reviews: The Extended Version Of Star Trek TNG ‘The Measure Of A Man’ 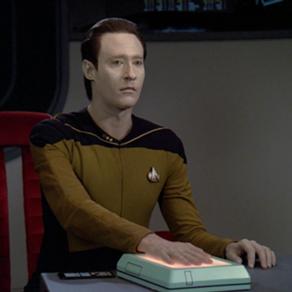 A large amount of original footage from Star Trek TNG ‘The Measure Of A Man’ was cut from the episode during editing, but has been restored for the TNG Season 2 Blu-ray release.

Data’s rights as a individual are challenged when a senior Starfleet scientist wishes to disassemble the android to learn how to build more officers like him. 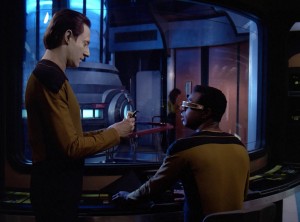 The extended version is 57 minutes, containing approximately 13 minutes of restored scenes and visual effects, which includes the following:

The extra footage only existed with the writer Melinda Snodgrass. All that existed was a VHS videotape of it. CBS was able to extended the cut with them finding the original filmed segments.

A really great episode from Season 2. I enjoyed re-watching and seeing the new footage for the first time in HD.  There is also a Hybrid version combining the HD on-air version of “The Measure of a Man” with video of the extra material taken from the VHS rough-cut of the episode that the writer Melinda Snodgrass had. There is also an audio commentary with Mike and Denise Okuda and writer Melinda Snodgrass on the making of the episode.