The Disaster Twins by Abbie Martin-Jones

What makes Star Trek such a success? Is it meeting new species? An idea of a better future? Possibly, however I would argue that it is the relationships between these people that really make star trek. Specifically the friendships formed in star trek, despite the characters differences and difficult, seemingly impossible situations they go through. In this feature I will be looking at a friendship that stood out for me, how it developed and how it compares to other friendships in Star Trek. 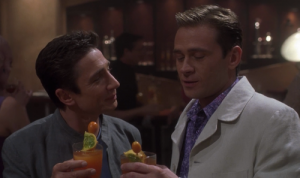 I will be focusing on the friendship between Trip and Malcolm, the friendship intrigues me because they have complete opposite personalities and very different ways of looking at things and approaching a problem. This is much like the Kirk, Spock friendship, as they both come from different cultures and find different solutions to problems.
You could also compare them to Harry and Tom, who seemed to be closer than Spock and Kirk, but Tom was always the one in charge and Harry followed. As well as they never really had arguments. This was a core part of the relationship between Trip and Malcolm. Another difference is the Tom & Harry friendship did not evolve as much as Reed and Tucker.

Another star trek friendship that is similar would be Miles and Bashir, they also had their agreements, but their friendship was a very close brother-like friendship, rather than Trip and Malcolm’s friendship which is more a friendship between colleagues.
The interactions between these two characters began right from the first episode, with Trip focusing on the engine, rather than other important components of the ship, which reed finds frustrating, even making impressions of his senior officer. Showing they didn’t start as the friends that they became after their time on enterprise.
Other episode examples:

•Silent Enemy- this is the episode where they started to work together and interact more. They first find conflict when the teams are not working as well as planned and when the first major decision of the project has to be made. It is only when trip takes a step back and talks to archer about another matter that he finds that reed is making a valid point. They then work together to fix the problem.

•Shuttle Pod One- In Shuttle Pod One the friendship really started to grow in its own unique way. Starting with conflict, Malcolm looking at the situation realistically and trip being optimistic. They seem to be offended by each other’s view, but given time they begin to understand each other point of view. After this life changing experience and great scenes that teach us about the characters and what they really feel, that you could only learn from a prolonged near death experience. They realise they even though they argue about how they should fix problems they both have the same goal. This is the point where they become friends, not just colleagues. This shows that they didn’t just happen to be friends at the beginning it took time to develop, and it developed on screen.

• Two Days and Two Nights- this episode shows they have begun to socialise outside of their work environment, it also is inspiration for the title of this feature. As two of the highest ranking officers on earths first interstellar star ship you would expect them to no problem on a relaxing holiday. However they seem to have a talent for getting into trouble, this holiday is no exception. They do manage to get out of the situation (after more arguing) and have yet another new life experience to add to their list.

•Dead Stop- you can see that reed trusts trip in this episode, as he is willing to overlook his by the book nature, to explore the automated station, without permission. Yet again they end up in trouble after the station beams them back onto Enterprise. This of course leads them to the ready room.

• Singularity- the black hole’s effects on them caused them to argue and even fight, on the bridge. However this did not seem to affect their friendship because they both knew that each other were influenced by the singularity. This shows that they know each a lot better than they did at the beginning of enterprise.

•The Aenar- they are again both trapped in a dire situation, now working very well as a team. They even begin to discuss more personal issues, such as T’Pol’s divorce from Koss.

•Divergence- after Malcolm help Trip board the ship, Malcolm is then taken away by the MACO guards, which leads trip to show concern. He then brings up the matter later with Archer as he friendship has made him concerned that Malcolm is being confined.

•In these are the voyagers we get to see the impact trip has had on Reed and how they should look beyond their first impressions. This also shows how much they have grown over the ten years. Reed even goes as far as saying “but now, I can’t imagine what these last 10 years would have been like without him”. This is unusual for someone who does not often share their emotions and personal thought.

Enterprise was one of the series that focused on the relationships between the main characters.
Brannon Braga said:
“We wanted to do a show that focused on the people, more so. Less plot driven shows, more character driven shows.” and continues to later say.
“Learning about each other, having an adventure, a human adventure.”
This helped because they had more time to develop the characters than in some of the other series or even other TV shows. It also makes sense that because the NX-01 Enterprise is a small ship and out there on their own, so the characters would have to rely on each other and learn to work with each other.

Maybe it was the dangerous situations that brought them closer together, or their common goals. One thing is certain, no matter how much they argued or got into situations only Trip and Malcolm could, they changed to look past their differences, respect each other’s opinion and eventually trust each other and form one of the best and most developed friendships in Star Trek.