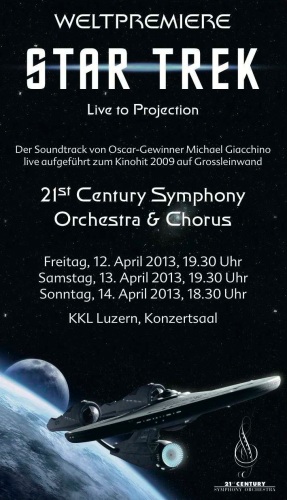 Michael Giacchino will perform the Intergalactic World Premiere of  Star Trek – Live to Projection with the 21st Century Symphony & Orchestra at the KKL Luzern Concert Hall, in Switzerland today.

Together with the composer Michael Giacchino, and Paramount Pictures, the film music and film in months of work for this concert performance were reworked. The result is a half-hour spectacle in the best live-to-Projection tradition. An evening concert not only for ‘Trekkies’, but for all lovers of good music and breathtaking adventures.
To Boldly Go!