What makes Star Trek in all its forms such an absorbing and compelling show? Part of it is that we have heroes we can root for; fighting for causes we can believe in, defeating all odds to make the galaxy a better place. Our heroes demonstrate bravery, courage and morals. They are the role models, the people we aspire to be like. Our heroes inspire us and can define how we believe we should live; many fans hope to be as intelligent as Sisko, as pioneering as Bashir…. as kick-ass as Kira!

However, in many ways, part of the appeal of the show is the enemy – we all have characters we love to hate. Enemies contribute important concepts to a story; they are a vital aspect of Star Trek. In order to believe in a hero we need to discover who and what they are fighting against and identify with our own ideals. But who or what are the worst enemies to the Federation? Which race threatens the vision of the Federation the most? Or are our enemies closer than we think?

Some obvious answers to the worst enemy of the Federation are the Borg, the Romulans or the Cardassians. There is no disputing their evil; the aims of the Borg go against human ideals of individualism and free will. An integral part of our identity is the belief we are self-determining. The Borg not only takes away that belief, but in fact belittles it as inefficient. In their strive for perfection they abandon what makes us unique, such as our interaction and relationship with others – which they would deem as irrelevant.

The Cardassians are ruthless tyrants, seeking to dominate the weak or vulnerable. They believe themselves to be superior to others and it is that claim that does not sit well with Federation ideals of equality. However when making these statements we shouldn’t generalise, as learnt by Kira in the DS9 episode ‘Duet’ where Marritza, a Cardassian filing clerk gets stabbed by a Bajoran simply for being a Cardassian. When Kira asks why he replies ‘he’s a Cardassian, isn’t that enough’ 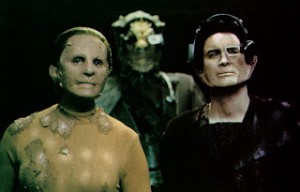 What makes the Founders a compelling enemy is their unpredictability. At least with the ‘villains’ mentioned earlier, we know the face of the Cardassians, the Borg… but the Founders are hidden enemies, often masquerading as friends or individuals in positions of trust and power. This way the Founders can make friends turn against on one another and can cause suspicion and paranoia right to the core of Starfleet. This makes them a potent enemy – they manage to divide opinion and this is what makes them dangerous; as a changeling said to Sisko in the episode ‘Paradise Lost’: “In the end it is your fear that will destroy you”.

The Marquis are a realistic enemy by today’s standards and of course many would argue that they are not an enemy, they fight for justice and freedom which many can sympathise with. – One man’s freedom fighter is another man’s terrorist – the Federation colonists left in Cardassian territory after the peace treaty feel abandoned and the lengths these citizens are willing to go demonstrate this graphically.

Often the enemy comes in the form of individuals in positions of trust and power, for example Kai Winn – my personal favourite enemy; no one brings out feelings of anger as hate in me as much as she does! Kai Winn is a clever and veiled enemy: never obviously aggressive, never raising her voice, she’s manipulative, condescending and completely power mad – a good combination in any villain! 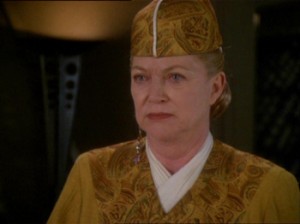 Also there are some ‘villains’ within Starfleet itself. For example there are some questionable admirals such as Admiral Leighton, suggesting that the enemy may be closer to home than we think. Admiral Leighton was willing to go to extreme lengths to implement his measures against the Dominion threat; he was willing to kill fellow Starfleet officers and frame Sisko as a changeling. As Sisko said to Leighton at the end of the episode “don’t you see you are fighting the wrong war?”

Star Trek is still as relevant as ever because even in its Utopian view of the future, it shows balance in its story lines and its characters. Corruption may exist in government, but does that make the whole nation corrupt? The Founders are formidable enemies, but Odo is a friend to the Federation… This offers a somewhat more realistic view into our future – the need to accept that often enemies are not obvious or may be amongst our own ranks… or they can be as apparent as the Jem Hadar!