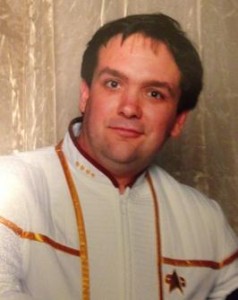 Favourite Trek Series: Deep Space 9 (Shocking I know what with me hosting a od dedicated to the show and all)

Favourite Captain: Despite me being about all things DS9 my favourite Captain is actually Picard. As a child I had no male role models (once my grandfather died) and as a child Picard just stood out as a strong role model. I said as much when I met the man himself at OzComicCon in June ’12

Favourite Ship: Has to be the USS Defiant “Tough little ship” with honourable mentions to the USS Prometheus and a special place in my heart for the Enterprise-E.

Favourite Episode: Way of the Warrior (DS9 Season 4 opener) The episode where my already favourite show went from Pretty good to AMAZING. The escalation of hostility with the Klingons (that later turned out to be Dominion engineered) and the addition of Worf to the cast really kick started the shows finest seasons.

Trekkie or Trekker: I’ve always identified myself as a Trekkie, no real reason really and I refuse to get up in the debate. I do however take issue between Nerd and Geek. (for the record i identify as a nerd)

Favourite non-regular character: For me this question is absolutely impossible to answer as DS9 had such a strong supporting cast to chose from. Nog had an amazing character arc and progression. Garak was fascinating from day 1. Martok was a fantastic leader. Rom and Leeta were great. Then the villains, Gul Dukat, Weyoun, the female shapeshifter, Kai Winn…..I think theres a definite episode of The Wilderness to be had with this discussion.

About me: I’m a 29 year old father of 2 and husband of 1. I live in Newcastle, Australia. Trek has been such a big part of my life for so long that even my sons Good Night song from when he was a baby through to now (he is almost 3) is the drinking song from Way of the Warrior. But my biggest Trekkie/er moment has got to be the fact that my baby daughters name is Ezri.

Find me on: Trek Mate: In The Wilderness