In a interview with MTV, Benedict Cumberbatch spoke about his character John Harrison.

“He’s a terrorist; he operates as a terrorist,” said the British actor. “He has extraordinary physical powers, but also mental powers. He can sow an idea, which is as powerful as gunshots or close-hand combat, which he’s masterful in. He tears into the fabric of both the world and the Enterprise family, and he leaves behind him a trail of devastation. It’s quite exciting to watch.”

“Giving away the full motivation would ruin it,” he said, “but it’s personal. It’s also political, I think. He’s somebody who, at some point in the film, you should feel a certain amount of empathy towards his cause, if not his means. … There’s no two-dimensional obstacle he presents purely and simply by the fact that he’s opposing our hero.” 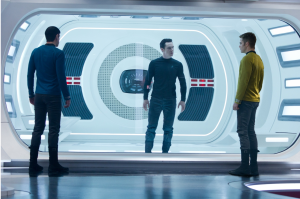 Benedict Cumberbatch was asked by Access Hollywood if he really is playing John Harrison, or could he be playing some other character?

“A few have asked that which is strange,” Benedict told Scott on Monday, joking about it being “strange,” considering it was wildly speculated he would play the youthful version of the character originated by Ricardo Montalban in a 1967 episode of the “Star Trek” television series – “Space Seed” — and later in the 1980s film, “The Wrath of Khan.”

“I play a character called John and not that other name,” Benedict continued. “It’s interesting. Speculation is speculation and that’s all fun.”

Cumberbatch also talked about his character being a terrorist like he did for the MTV interview.

“I play John Harrison who’s a terrorist and an extraordinary character in his own right,” the Brit said. “He’s somebody who is not your two-dimensional cookie cutter villain. He’s got an extraordinary purpose, and I hope that at one point or other in the film you might even sympathize with the reasons he’s doing what he’s doing — not necessarily the means and the destruction he causes. But it was a great ride, not just because he’s the bad guy and the antagonist but also because he has a purpose and it’s hard not to see his point of view at certain points.”